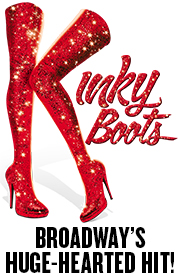 r Best Score for Kinky Boots), have announced casting for the second year of the first national tour.

Kinky Boots will begin its Florida tour with a performance at the Straz Center’s Morsani Hall, Dec. 1-6, as part of the Bank of America Best of Broadway Tampa Bay series. The Adrienne Arsht Center for the Performing Arts of Miami-Dade County, along with Broadway Across America and presenting sponsor Bank of America, will kick off the 2015-2016 Broadway in Miami season with the South Florida premiere of Kinky Boots from Dec. 8-13 at the Ziff Ballet Opera House.

J. Harrison Ghee is kicking up his heels as Lola. Ghee understudied the role of Lola during the first year of the tour and was the Assistant Dance Captain. Adam Kaplan (Newsies, Showboat) stars as shoe factory owner Charlie Price. Ghee and Kaplan are joined by Tiffany Engen (Legally Blonde) as Lauren, Aaron Walpole (Les Miserables, Jesus Christ Superstar) as Don, Charissa Hogeland (Heathers The Musical) as Nicola, Jim J. Bullock (Hairspray, “Too Close for Comfort”) as George and E. Clayton Cornelious (Beautiful: The Carole King Musical) as the Standby for Lola.

Inspired by true events, Kinky Boots takes you from a gentlemen’s shoe factory in Northampton to the glamorous catwalks of Milan. Charlie Price is struggling to live up to his father’s expectations and continue the family business of Price & Son. With the factory’s future hanging in the balance, help arrives in the unlikely but spectacular form of Lola, a fabulous performer in need of some sturdy new stilettos.

The current performance schedule is listed below. For Tampa:

Juan Torres-Falcon, a Miami native and a graduate of Gulliver Preparatory School, has been living his musical theater dream in New York City for the past ten years, and now he is traveling around the country in Kinky Boots as one of the Angels. He is absolutely excited to play the Adrienne Arsht Center, as I’m sure you’ll be able to tell in this exclusive Hotspots interview.

How excited are you to come home to Florida to perform Kinky Boots?

When people ask me where I’m from, I always make sure to note that I live in New York, but I’m from Miami. I love my city. Being able to perform at the Adrienne Arsht Center is probably one of the biggest joys of my entire life. Miami is my great love and so is Kinky Boots and I can’t wait for these two big forces in my life to finally meet.

Tell me about your role in the production.

I play one of the Angels. There are six of us, and we’re sort of a Greek chorus that advances the story. We’re all in drag too, so I’m wearing all that hair and the dresses and the makeup…we are definitely glamazons, thanks to our costume designer and our wig designer! Lola is the star of the show and I’m part of the drag queen cast that works in her club. I’d do the entire job for free if I could be kept in just wigs and shoes. Wigs and shoes! [laughs]

What does Kinky Boots mean to you personally?

One thing about this show is that the message is so clear and open-hearted that it’s kind of irresistible. We’ve played venues like Omaha, Nebraska, and I was wondering how we’d go over there considering it’s a lot of people in drag dancing on a stage, but the message truly is universal. You couldn’t do something like this in a lot of the country just ten years ago. I hope that the message of the show resonates with young people who may be in the audience, because I know this show makes a difference in people’s lives. I’m proof.